What is Bimodal IT?

Gartner defines Bimodal IT as "the practice of managing two separate but coherent styles of work: one focused on predictability; the other on exploration.

Both modes are essential to create substantial value and drive significant organizational change, and neither is static. Marrying a more predictable evolution of products and technologies (Mode 1) with the new and innovative (Mode 2) is the essence of an enterprise bimodal capability. Both play an essential role in digital transformation."[2]

Bimodal IT is helping to solve major issues in how companies move forward. Traditionally, there can be a lot of confusion and pressure on IT departments that have to maintain infrastructure and keep operational hardware running, while also trying to get creative and modernize business operations. Bimodal IT helps to better outline the ways that companies can do both of those things at the same time.[3]

What is a Bimodal IT Organization? [4]

A Bimodal IT Organization splits the IT department into two teams, or, as the definition implies, two modes.

The Bimodal IT Organization - Marathon Runner and Sprinter[5]

According to Peter Sondergaard, senior vice president at Gartner and global head of Research, “CIOs can’t transform their old IT organization into a digital startup, but they can turn it into a bi-modal IT organization.” Gartner's prediction in 2014 was that 75% of IT Organizations would be bi-modal in some way by 2017. they refer to those in the organization that fall under the traditional and predictable Mode 1 as 'Marathon Runners' and those that fall under the innovative and agile Mode 2 as 'Sprinters'. 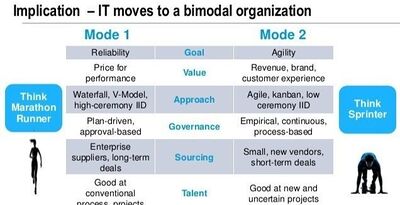 CIOs need to create business operations that are both rock-solid and fluid if they want to succeed in digital business, according to Gartner, Inc. At the same time, the IT organization will need bimodal IT to help CIOs efficiently develop the speed and agility their organization needs to meet digital challenges.

The Bimodal IT Organization Chart - The Division of IT Functions[6]

The figure below shows IT functions that has been divided along the lines of Mode 1 and Mode 2. To help emphasize that the two halves are intended to be separate (as part of the Gartner recommendation) there is some color added to the IT organizational chart. On the left of the IT org chart in purple is the Mode 1 group, and on the right in orange is the Mode 2 group. The colors have no particular special meaning here and are only being used to provide a more visually striking contrast and highlight that the two groups within IT are considered separate and distinct of each other. Types of Bimodal IT Organization[7]

In the age of digital business transformation, enterprises seek to increase their agility and speed of IT delivery. To accomplish this, they change their existing control-driven IT organizational structures and processes and establish separate modes for business-oriented and traditional IT delivery (“bimodal IT”). Though the concept of bimodal IT has been discussed in practice, empirical research regarding the approaches employed to implement bimodal IT is scarce.

A research paper by professors and researchers from the University of Hamburg and the Leuphana University of Lüneburg, presents findings from a qualitative-empirical study on the bimodal IT implementation approaches of nine companies. It identifies five different types of bimodal IT in these enterprises and shows that specific mechanisms are applied to enhance the (business) IT alignment in the respective organizational settings of each type. They identify and describe five types of bimodal IT (see table below)

They describe the implementation approach and the alignment mechanisms for each type and show how agile IT is embedded in the IT organization (location) and highlight the role of outsourcing. They further highlight the reach of agile IT in order to indicate which parts of the IT value network operate in this mode, as well as how agile IT is managed and controlled. Finally, they show how the alignments between traditional and agile IT and between (agile) IT and business are achieved. The order in which they describe these five types is based on the extent and degree of changes a traditional IT organization needs to make in order to implement the respective bimodal IT type, beginning with the least intrusive.