Computer Security is the protection of computer systems and information from harm, theft, and unauthorized use. Computer hardware is typically protected by the same means used to protect other valuable or sensitive equipment, namely, serial numbers, doors and locks, and alarms. The protection of information and system access, on the other hand, is achieved through other tactics, some of them quite complex. The most basic means of protecting a computer system against theft, vandalism, invasion of privacy, and other irresponsible behaviours is to electronically track and record the access to, and activities of, the various users of a computer system. This is commonly done by assigning an individual password to each person who has access to a system. The computer system itself can then automatically track the use of these passwords, recording such data as which files were accessed under particular passwords and so on. Another security measure is to store a system’s data on a separate device, or medium, such as magnetic tape or disks, that is normally inaccessible through the computer system. Finally, data is often encrypted so that it can be deciphered only by holders of a singular encryption key.

The Concerns of Computer Security[2]

Computer security threats are possible dangers that can possibly hamper the normal functioning of your computer. In the present age, cyber threats are constantly increasing as the world is going digital. The most harmful types of computer security are:

These are perhaps the most common security threats that you’ll come across. Apart from these, there are others like spyware, wabbits, scareware, bluesnarfing and many more. Fortunately, there are ways to protect yourself against these attacks. 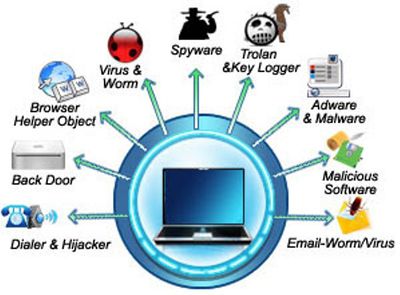 The growth in the number of computer systems and the increasing reliance upon them by individuals, businesses, industries and governments means that there are an increasing number of systems at risk.