A Conflict of Interest occurs when an entity or individual becomes unreliable because of a clash between personal (or self-serving) interests and professional duties or responsibilities. Such a conflict occurs when a company or person has a vested interest — such as money, status, knowledge, relationships, or reputation — which puts into question whether their actions, judgment, and/or decision-making can be unbiased. When such a situation arises, the party is usually asked to remove themselves, and it is often legally required of them.[1] 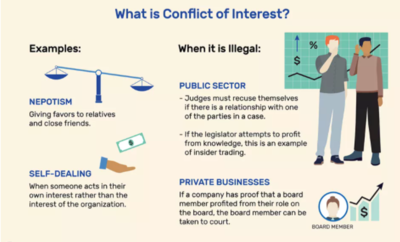 Types of Conflict of Interest[2]
The following are the most common forms of conflicts of interests:

Other improper acts that are sometimes classified as conflicts of interests may have better classification. For example, accepting bribes can be classified as corruption, use of government or corporate property or assets for personal use is fraud, and unauthorized distribution of confidential information is a security breach. For these improper acts, there is no inherent conflict. COI is sometimes termed competition of interest rather than "conflict", emphasizing a connotation of natural competition between valid interests—rather than the classical definition of conflict, which would include by definition including a victim and unfair aggression. Nevertheless, this denotation of conflict of interest is not generally seen.