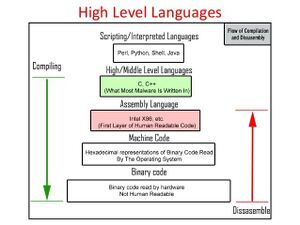 Each of these languages use different syntax. Some are designed for writing desktop software programs, while others are best-suited for web development. But they all are considered high-level since they must be processed by a compiler or interpreter before the code is executed. Source code written in languages like C++ and C# must be compiled into machine code in order to run. The compilation process converts the human-readable syntax of the high-level language into low-level code for a specific processor. Source code written in scripting languages like Perl and PHP can be run through an interpreter, which converts the high-level code into a low-level language on-the-fly.[2]

In contrast, high-level languages are easier to grasp. It allows a programmer to write code more efficiently. High-level languages have more safeguards to keep coders from issues commands that could potentially damage a computer. These languages don’t give programmers as much control as low-level ones do.

Here are some main differences between high and low-level languages: