The RACI Matrix , an essential IT Governance tool, is a responsibility assignment chart that maps out every task, milestone or key decision involved in completing a project and assigns which roles are Responsible for each action item, which personnel are Accountable, and, where appropriate, who needs to be Consulted or Informed. The acronym RACI stands for the four roles that stakeholders might play in any project. A RACI matrix (aka RACI Chart) is the simplest, most effective means for defining and documenting project roles and responsibilities. Knowing exactly who is responsible, who is accountable, who needs to be consulted, and who must be kept informed at every step will significantly improve your chances of project success. The RACI Matrix is also referred to as Responsibility assignment matrix (RAM)[1] First introduced in the 1950s, RACI was originally called the “Decision Rights Matrix” and is also known as “Responsibility Charting.” 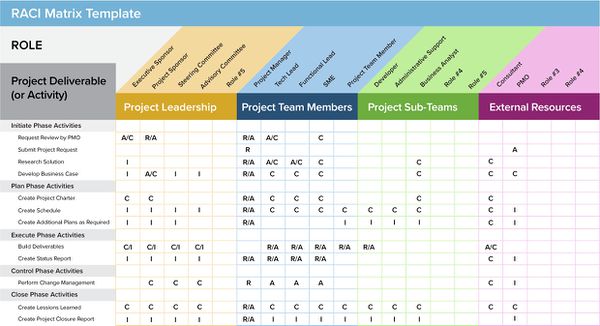 When to use a RACI Matrix[3]
A RACI chart serves just about every project well. But it’s especially helpful when tasks require multiple resources, run concurrently, or depend on other tasks. Here are a few scenarios when a RACI chart comes in handy:

There are also a number of variations to the meaning of RACI participation types: