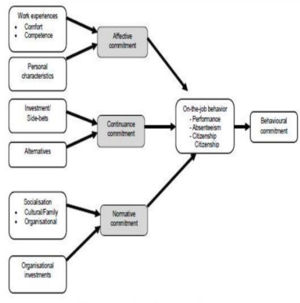 The questionnaire has been designed to look at an individual in terms of three particular psychological mindsets which affect an individual’s decision on whether they will stay with the organization (Meyer and Allen, 1997). This questionnaire measures Affective Commitment, Continuance Commitment, and Normative Commitment which led to the creation of Meyer and Allen’s (1991) Three Component Model that differentiates between different levels of commitment.

Since the model was made, there has been conceptual critique to what the model is trying to achieve. Specifically from three psychologists, Omar Solinger, Woody Olffen, and Robert Roe. To date, the three-component conceptual model has been regarded as the leading model for organizational commitment because it ties together three aspects of earlier commitment research (Becker, 2005; Buchanan, 2005; Kanter, 1968; Mathieu & Zajac, 1990; Mowday, Porter, & Steers, 1982; Salancik, 2004; Weiner, 2004; Weiner & Vardi, 2005). However, a collection of studies have shown that the model is not consistent with empirical findings. Solinger, Olffen, and Roe use a later model by Alice Eagly and Shelly Chaiken, Attitude-behavior Model (2004), to present that TCM combines different attitude phenomena. They have come to the conclusion that TCM is a model for predicting turnover. In a sense the model describes why people should stay with the organization whether it is because they want to, need to, or ought to. The model appears to mix together an attitude toward a target, that being the organization, with an attitude toward a behavior, which is leaving or staying. They believe the studies should return to the original understanding of organizational commitment as an attitude toward the organization and measure it accordingly. Although the TCM is a good way to predict turnover, these psychologists do not believe it should be the general model. Because Eagly and Chaiken's model is so general, it seems that the TCM can be described as a specific subdivision of their model when looking at a general sense of organizational commitment. It becomes clear that affective commitment equals an attitude toward a target, while continuance and normative commitment are representing different concepts referring to anticipated behavioral outcomes, specifically staying or leaving. This observation backs up their conclusion that organizational commitment is perceived by TCM as combining different target attitudes and behavioral attitudes, which they believe to be both confusing and logically incorrect. The attitude-behavioral model can demonstrate explanations for something that would seem contradictory in the TCM. That is that affective commitment has stronger associations with relevant behavior and a wider range of behaviors, compared to normative and continuance commitment. Attitude toward a target (the organization) is obviously applicable to a wider range of behaviors than an attitude toward a specific behavior (staying). After their research, Sollinger, Olffen, and Roe believe Eagly and Chaiken's attitude-behavior model from 1993 would be a good alternative model to look at as a general organizational commitment predictor because of its approach at organizational commitment as a singular construct, which in turn would help predicting various behaviors beyond turnover.[3]