Software is a computer program that provides instructions and data to execute user’s commands. It is an indispensable part of the machine you cannot see, but it allows you to use the computer.[1]Software is programmed instructions stored in the memory of stored-program digital computers for execution by the processor. Software is a recent development in human history, and it is fundamental to the Information Age.

Software, in its most general sense, is a set of instructions or programs instructing a computer to do specific tasks. Software is a generic term used to describe computer programs that run on PCs, mobile phones, tablets, or other smart devices. Software is often used to describe all the functional aspects of a computer that do not refer to its physical components (hardware). Scripts, applications, programs and a set of instructions are all terms often used to describe software. Everything that “runs” on a computer, from an operating system, to a diagnostic tool, video game, or app can be defined as software.[2]

Historical Overview of Software[3]
The first generation of software for early stored-program digital computers in the late 1940s had its instructions written directly in binary code, generally written for mainframe computers. Later, the development of modern programming languages alongside the advancement of the home computer would greatly widen the scope and breadth of available software, beginning with assembly language, and continuing on through functional programming and object-oriented programming paradigms.

The first known computer algorithm was written by Charles Babbage in the 19th century for his planned Analytical Engine, to translate Luigi Menabrea's work on Bernoulli numbers for machine instruction. However, this remained theoretical only - the lesser state of engineering in the lifetime of these two mathematicians proved insufficient to construct the Analytical Engine.

The first modern theory of software was proposed by Alan Turing in his 1935 essay Computable numbers with an application to the Entscheidungsproblem (decision problem).

However, prior to 1946, software as we now understand it – programs stored in the memory of stored-program digital computers – did not yet exist. The very first electronic computing devices were instead rewired in order to "reprogram" them. The ENIAC, one of the first electronic computers, was programmed largely by women who had been previously working as human computers. Engineers would give the programmers blueprints of the ENIAC wiring and expected them to figure out how to program the machine. The women who worked as programmers prepped the ENIAC for its first public reveal, wiring the patch panels together for the demonstrations. Kathleen Booth developed Assembly Language in 1950 to make it easier to program the computers she worked on at Birkbeck College.

Grace Hopper worked as one of the first programmers of the Harvard Mark I. She later created a 500 page manual for the computer. Hopper is often falsely credited with coining the terms "bug" and "debugging," when she found a moth in the Mark II, causing a malfunction; however, the term was in fact already in use when she found the moth. Hopper developed the first compiler and brought her idea from working on the Mark computers to working on UNIVAC in the 1950s. Hopper also developed the programming language FLOW-MATIC to program the UNIVAC. Frances E. Holberton, also working at UNIVAC, developed a code, C-10, which let programmers use keyboard inputs and created the Sort-Merge Generator in 1951. Adele Mildred Koss and Hopper also created the precursor to a report generator.

Who Creates Software?[4]
The definition of software implies that someone must sit at a computer somewhere and write the computer code for it. It’s true; there are independent coding experts, teams of engineers, and large corporations all creating software and vying for your attention. Adobe makes Adobe Reader and Adobe Photoshop; Microsoft makes the Microsoft Office Suite; McAfee makes antivirus software; Mozilla makes Firefox; Apple makes iOS. Third parties make apps for Windows, iOS, Android, and more. There are millions of people writing software all over the world right now.

These are some of the most features of system software as follows,

These are some of the features of application software as follows, 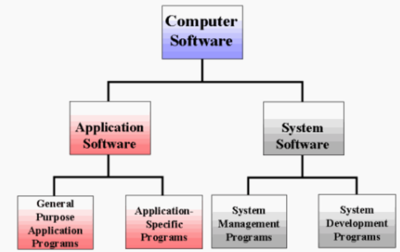 Software Classification[6]
There is wide range of available software developed for a specific purpose, the number of programs increases exponentially year after year, we can identify and classify different concepts as: