Bisociation is a term that describes the simultaneous mental association of linking an idea or object with two completely separate and unrelated fields. It calls for unconventional thinking that aims to remove the common beliefs and repetitive thought processes that more often than not produce similar results. The aim is to avoid alterations to existing ideas and to create transformations instead. This can be achieved by accepting the limitations of common solutions and aiming to exceed and advance on the previous methods used to create them. This method is about helping to ensure that no two ideas are the same and provides each new project with a level of originality in its development and thinking. For example, bjarke Ingles brought a recycling center and a snow-covered mountain together to form his waste-to-energy plant in Denmark.[1]

Bisociation is a concept and homonym technique that consists of creating associations out of unrelated mind processes, contexts, or categories to discover new unexplored information ideas, and solutions. Bisociation is a term coined by Arthur Koestler in his 1964 book "The Act of Creation". The concept has developed after the conceptual failure of traditional creativity techniques based on the association by similarity.

When associations of information are not of an obvious nature, especially when relations are among different contexts, Bisociation can help to find a great creative idea. According to Koestler, Bisociation literally means "to join unrelated, often conflicting, information in a new way." Koestler suggested that by using the association of pictures and terms from different and apparently unconnected contexts, it is really possible to create something innovative and original. The concept's scope and strength, similar to Rätselvermehrung, is to discover breakthrough ideas, unlock mental habits (Cognitive Biases) and disengage immediate or familiar associations.[2]

Koestler proposed the Bisociation concept to distinguish the type of metaphoric thinking that leads to acts of great creativity from the more “pedestrian” associative style of thinking, with which we are so familiar in our everyday lives and which pervades many of today's computing approaches. Associative thinking is based on the “habits” or set of routines that have been established over a period of time Bisociation, according to Koestler, means to join unrelated, often conflicting, information in a new way. It is being “double-minded” or able to think simultaneously on more than one plane or matrix of thought (see Figure below). “When two independent matrices of perception or reasoning interact with each other the result ... is a ... fusion in a new intellectual synthesis ...” . Frank Barron reinforces this idea and characterizes Bisociation as “the ability to tolerate chaos or seemingly opposite information”. Koestler makes a clear distinction between more routine or habitual thinking (association) operating within a single plane or matrix of thought, and the more creative bisociative mode of thinking which connects independent autonomous matrices. Koestler’s basic concept of Bisociation is illustrated in Figure 1. The diagram depicts two matrices of thought (domains or knowledge bases in our terminology), M1 and M2, as orthogonal planes. M1 and M2 represent two self-contained but “habitually incompatible” matrices of thought. An event, idea, situation, concept, or problem, π, which is perceived simultaneously in both matrices is not merely linked to one associative context (M1 or M2) but bisociated with two associative contexts (M1 and M2). In the diagram, π is illustrated by the thick line cutting across M1 and M2. The diagram illustrates six concepts labeled c1,..., and c6. The concepts c1, c2, c3 and c6 are perceivable in matrix M2 and c1, c2, c3, c4 and c5 are perceivable in M1. The concepts c1, c2, and c3 are associated with the problem π – because c1, c2, and c3 are perceivable in both matrices, it is possible to “see” the problem simultaneously from two frames of mind. 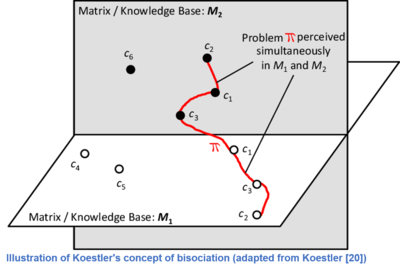 Central to Koestler’s concept of Bisociation are the notions of a matrix and a code Koestler; we quote from page 38: ... " to introduce a pair of related concepts which play a central role in this book and are indispensable to all that follows. ... I shall use the word ‘matrix ’ to denote any ability, habit, or skill, any pattern of ordered behavior governed by a ‘code’ of fixed rules." A matrix in Koestler’s framework denotes any ability, skill, habit, or pattern of ordered behavior. Matrices shape our perceptions, thoughts, and activities; they could be viewed as condensations of learning into “habit”. For example, a spider has an innate skill that enables it to build webs, a mathematician possesses the ability of mathematical reasoning, and a chess grandmaster has a knowledge base that allows him to play chess at a very high level. The abilities and skills represented by a matrix may be applied to concrete problems and tasks in a flexible way. For example, depending on the environment a spider finds itself in, it may choose three, four, or more points of attachment to suspend its web. Each matrix in Koestler’s model of Bisociation is governed by a set of fixed codes or rules. The rules could be innate or acquired. For example, in the game of chess, the rules of the game are fixed, while the patterns of knowledge (allowing one to play well or not so well) vary across players. In mathematics, operations such as multiplication, differentiation, integration, etc. constitute fixed rules that govern mathematical reasoning. Another example of a code is the assumptions, concepts, notions, etc. that underly religious, political, economic, philosophical, and similar debates and arguments. For instance, a debate on abortion may be held “in terms of” religious morality or social responsibility. Often the rules that govern a matrix of skill (ability, habit) function on a lower level of awareness than the actual performance itself (playing the piano, carrying out a conversation, formulating strategy).[3]

Domains that are characterized by the need to develop innovative solutions require a form of creative information discovery from increasingly complex, heterogeneous, and geographically distributed information sources. These domains, including design and engineering (drugs, materials, processes, devices), areas involving art (fashion and entertainment), and scientific discovery disciplines, require a different ICT paradigm that can help users to uncover, select, re-shuffle, and combine diverse contents to synthesize new features and properties leading to creative solutions. People working in these areas employ creative thinking to connect seemingly unrelated information, for example, by using metaphors or analogical reasoning. These modes of thinking allow the mixing of conceptual categories and contexts, which are normally separated. The functional basis for these modes is a mechanism called BISOCIATION (see Arthur Koestler - The Act of Creation).

Bisociation in Graphic Design[5]
In graphic design, bisociation is an important creative technique. On the one hand, it pushes people to think from a brand new perspective, which often brings about new understandings of ordinary, everyday objects. On the other hand, the design work is usually quite surprising and funny.

To apply this design technique, we first need to figure out the possible connections between seemingly unrelated objects. Here are some of the processes: comparison, abstraction, categorization, analogies, and metaphors. For example, to make a bisociation from “turtle” and “tea”, we may start with creating analogies. They share similar shapes, are both green in color, and always float in water. Hence, we may end up with a turtle with a tea leaf-like shell.