Encyclopedia Britannica defines Human Capital as "intangible collective resources possessed by individuals and groups within a given population. These resources include all the knowledge, talents, skills, abilities, experience, intelligence, training, judgment, and wisdom possessed individually and collectively, the cumulative total of which represents a form of wealth available to nations and organizations to accomplish their goals." Human capital is available to generate material wealth for an economy or a private firm. In a public organization, human capital is available as a resource to provide for the public welfare. How human capital is developed and managed may be one of the most important determinants of economic and organizational performance.[1]

Economist Theodore Schultz invented the term "human capital" in the 1960s to reflect the value of human capacities. He believed human capital was like any other type of capital; it could be invested in through education, training and enhanced benefits that lead to an improvement in the quality and level of production. An organization is often said to only be as good as its people. Directors, employees and leaders that make up an organization's human capital are critical to its success. Human capital is typically managed by an organization's human capital management (HCM) department, commonly referred to as the human resources (HR) department. A HCM department oversees the organization's workforce acquisition, management and optimization. The HCM department's other directives include workforce planning and strategy, recruitment, employee training and development, and reporting and analytics. Human capital tends to migrate, especially in global economies. That is why you will see a shift of this type of capital from developing places or rural areas to more developed and urban areas. Some economists have dubbed this a "brain drain" — making poorer places poorer and richer places richer.[2] 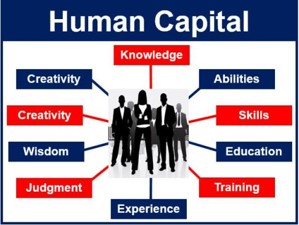 Kinds of Human Capital[4]
There are two kinds of human capital: general and specific.

Human resource development, part of human resource management, involves training and developing employees. It is an important factor in maintaining competitiveness. Warren Buffett, an American business magnate, investor, and philanthropist, said the following: “Investing in yourself is the best thing you can do. Anything that improves your own talents, nobody can tax it or take it away from you.” “They can run up huge deficits and the dollar can become worth far less. You can have all kinds of things happen.” “But if you’ve got talent yourself, and you’ve maximized that talent, you’ve got a tremendous asset that can return ten-fold.”

The Significance of Human Capital Theory[6]
The added value that people can contribute to an organization is emphasized by human capital theory. It regards people as assets and stresses that investment by organizations in people will generate worthwhile returns. Human capital theory is associated with the resource-based view of the fi rm as developed by Barney (1991). This proposes that sustainable competitive advantage is attained when the fi rm has a human resource pool that cannot be imitated or substituted by its rivals. Boxall (1996) refers to this situation as one that confers ‘human capital advantage’. But he also notes (1996, 1999) that a distinction should be made between ‘human capital advantage’ and ‘human process advantage’. The former results from employing people with competitively valuable knowledge and skills, much of it tacit. The latter, however, follows from the establishment of difficult to imitate, highly evolved processes within the firm, such as cross-departmental cooperation and executive development. Accordingly, ‘human resource advantage’, the superiority of one firm’s labour management over another’s, can be thought of as the product of its human capital and human process advantages

Criticism of Human Capital Theory[8]
The concept of human capital can be infinitely elastic, including unmeasurable variables such as personal character or connections with insiders (via family or fraternity). This theory has had a significant share of study in the field proving that wages can be higher for employees on aspects other than human capital. Some variables that have been identified in the literature of the past few decades include, gender and nativity wage differentials, discrimination in the work place, and socioeconomic status. The prestige of a credential may be as important as the knowledge gained in determining the value of an education. This points to the existence of market imperfections such as non-competing groups and labor-market segmentation. In segmented labor markets, the "return on human capital" differs between comparably skilled labor-market groups or segments. An example of this is discrimination against minority or female employees. Following Becker, the human capital literature often distinguishes between "specific" and "general" human capital. Specific human capital refers to skills or knowledge that is useful only to a single employer or industry, whereas general human capital (such as literacy) is useful to all employers. Economists view firm-specific human capital as risky, since firm closure or industry decline leads to skills that cannot be transferred (the evidence on the quantitative importance of firm specific capital is unresolved). Human capital is central to debates about welfare, education, health care, and retirement.. In 2004, "human capital" (German: Humankapital) was named the German Un-Word of the Year by a jury of linguistic scholars, who considered the term inappropriate and inhumane, as individuals would be degraded and their abilities classified according to economically relevant quantities. "Human capital" is often confused with human development. The UN suggests "Human development denotes both the process of widening people's choices and improving their well-being". The UN Human Development indices suggest that human capital is merely a means to the end of human development: "Theories of human capital formation and human resource development view human beings as means to increased income and wealth rather than as ends. These theories are concerned with human beings as inputs to increasing production".