A Remote Procedure Call (RPC) is a network programming model or interprocess communication technique that is used for point-to-point communications between software applications. Client and server applications communicate during this process. A remote procedure call is sometimes called a function call or a subroutine call.[1]

History and Origins[2]
Response–request protocols date to early distributed computing in the late 1960s, theoretical proposals of remote procedure calls as the model of network operations date to the 1970s, and practical implementations date to the early 1980s. In the 1990s, with the popularity of object-oriented programming, the alternative model of remote method invocation (RMI) was widely implemented, such as in Common Object Request Broker Architecture (CORBA, 1991) and Java remote method invocation. RMIs in turn fell in popularity with the rise of the internet, particularly in the 2000s. Remote procedure calls used in modern operating systems trace their roots back to the RC 4000 multiprogramming system, which used a request-response communication protocol for process synchronization. The idea of treating network operations as remote procedure calls goes back at least to the 1970s in early ARPANET documents. In 1978, Per Brinch Hansen proposed Distributed Processes, a language for distributed computing based on "external requests" consisting of procedure calls between processes. Bruce Jay Nelson is generally credited with coining the term "remote procedure call" (1981), and the first practical implementation was by Andrew Birrel and Bruce Nelson, called Lupine, in the Cedar environment at Xerox PARC. Lupine automatically generated stubs, providing type-safe bindings, and used an efficient protocol for communication. One of the first business uses of RPC was by Xerox under the name "Courier" in 1981. The first popular implementation of RPC on Unix was Sun's RPC (now called ONC RPC), used as the basis for Network File System.

How RPC Works[3]
An RPC is analogous to a function call. Like a function call, when an RPC is made, the calling arguments are passed to the remote procedure and the caller waits for a response to be returned from the remote procedure. Figure 1. below shows the flow of activity that takes place during an RPC call between two networked systems. The client makes a procedure call that sends a request to the server and waits. The thread is blocked from processing until either a reply is received, or it times out. When the request arrives, the server calls a dispatch routine that performs the requested service, and sends the reply to the client. After the RPC call is completed, the client program continues. RPC specifically supports network applications.

In the RPC model, you can formally specify an interface to the remote procedures using a language designed for this purpose. This language is called the Interface Definition Language, or IDL. The Microsoft implementation of this language is called the Microsoft Interface Definition Language, or MIDL. After you create an interface, you must pass it through the MIDL compiler. This compiler generates the stubs that translate local procedure calls into remote procedure calls. Stubs are placeholder functions that make the calls to the run-time library functions, which manage the remote procedure call. The advantage of this approach is that the network becomes almost completely transparent to your distributed application. Your client program calls what appear to be local procedures; the work of turning them into remote calls is done for you automatically. All the code that translates data, accesses the network, and retrieves results is generated for you by the MIDL compiler and is invisible to your application. 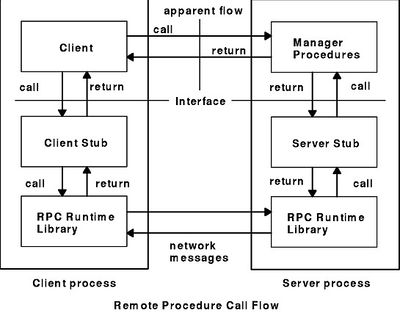 In the RPC model, only one of the two processes is active at any given time. Furthermore, this model is only an example. The RPC protocol makes no restrictions on the concurrency model implemented, and others are possible. For example, an implementation can choose asynchronous Remote Procedure Calls so that the client can continue working while waiting for a reply from the server. Additionally, the server can create a task to process incoming requests and thereby remain free to receive other requests.

RPC Processes and Interactions[6]
The RPC components make it easy for clients to call a procedure located in a remote server program. The client and server each have their own address spaces; that is, each has its own memory resource allocated to data used by the procedure. The following figure (Figure 4.) shows the RPC process.

The client stub then calls functions in the RPC client runtime library (rpcrt4.dll) to send the request and its parameters to the server. If the server is located on the same host as the client, the runtime library can use the Local RPC (LRPC) function and pass the RPC request to the Windows kernel for transport to the server. If the server is located on a remote host, the runtime library specifies an appropriate transport protocol engine and passes the RPC to the network stack for transport to the server. RPC can use other IPC mechanisms, such as named pipes and Winsock, to accomplish the transport. The other IPC mechanisms allow RPC more flexibility in the way in which it completes its communications tasks.

RPC Architecture[8]
By replacing dedicated protocols and communication methods with a robust and standardized interface, RPC is designed to facilitate communication between client and server processes. The functions contained within RPC are accessible by any program that must communicate using a client/server methodology. The following figure (Figure 3.) shows the RPC architecture.