What is Transformational Leadership?

Transformational leadership is defined as a leadership approach that causes a change in individuals and social systems. In its ideal form, it creates valuable and positive change in the followers with the end goal of developing followers into leaders. Enacted in its authentic form, transformational leadership enhances the motivation, morale, and performance of followers through a variety of mechanisms. These include connecting the follower's sense of identity and self to the mission and the collective identity of the organization; being a role model for followers that inspires them; challenging followers to take greater ownership of their work, and understanding the strengths and weaknesses of followers, so the leader can align followers with tasks that optimize their performance....[1]

Transformational leadership takes into account individual traits, organizational culture, and characteristics. It also models leadership behaviors. It causes a positive impact on followers and groups and increases outcomes. See the chart below: 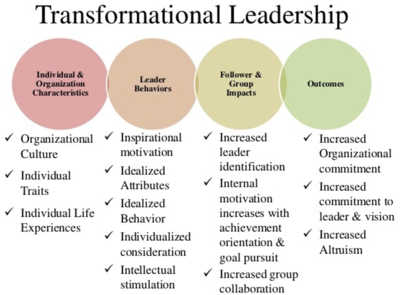 Transformational leaders are sometimes called quiet leaders. They are the ones that lead by example. Their style tends to use rapport, inspiration, or empathy to engage followers. They are known to possess courage, confidence, and the willingness to make sacrifices for the greater good. They possess a single-minded need to streamline or change things that no longer work. The transformational leader motivates workers and understands how to form them into integral units that work well with others. [3] Transformational leaders create a culture of active thinking through intellectual stimulation, and this culture encourages followers to become more involved in the organization (Tims et al., 2011).

The Elements of Transformational Leadership[6]

Characteristics of a Transformational Leader[7]

Whilst the Transformational Leader seeks overtly to transform the organization, there is also a tacit promise to followers that they also will be transformed in some way, perhaps to be more like this amazing leader. In some respects, then, the followers are the product of the transformation. Transformational Leaders are often charismatic but are not as narcissistic as pure Charismatic Leaders, who succeed through a belief in themselves rather than a belief in others. One of the traps of Transformational Leadership is that passion and confidence can easily be mistaken for truth and reality. Whilst it is true that great things have been achieved through enthusiastic leadership, it is also true that many passionate people have led the charge right over the cliff and into a bottomless chasm. Just because someone believes they are right, it does not mean they are right. Paradoxically, the energy that gets people going can also cause them to give up. Transformational Leaders often have large amounts of enthusiasm which, if relentlessly applied, can wear out their followers. Transformational Leaders also tend to see the big picture, but not the details, where the devil often lurks. If they do not have people to take care of this level of information, then they are usually doomed to fail. Finally, Transformational Leaders, by definition, seek to transform. When the organization does not need transformation and people are happy as they are, then such a leader will be frustrated. Like wartime leaders, however, given the right situation they come into their own and can be personally responsible for saving entire companies.[8]

Transformational leadership theory makes the following assumptions about how the process of leader-follower engagement works. We might call these the rules of engagement.

Transformational leadership can be contrasted with transactional leadership. The latter implies leadership based on an exchange process wherein autonomous agents may benefit, which in turn implies reciprocity (Simola et al., 2012). Bass (1990) indicates that transactional leadership can be characterized by several elements not necessarily mutually excluding. The first dimension is of contingent rewards or the recognition of achievement by rewarding efforts and good performance. The second is active management by exception which is directed at managing the process. Leaders monitor the lack of compliance with established rules and standards, and when required undertake corrective measures. Transactional leadership can also focus on passive management by exception. In the latter, leaders are meant to intervene only in cases in which set objectives are not achieved. The last characteristic of transactional leadership is laissez-faire in which leaders avoid making decisions and those involved in the process relinquish all responsibilities. Wang and Howell (2010) argue that transformational leadership can be focused on the individual and group levels. In the first instance, the aim is to empower individuals in order to “develop their full potential, enhance their abilities and skills, and improve their self-efficacy and self-esteem.” The influence of the leaders is strengthened by their interest in the followers as individuals. Transformational leaders strive to understand employees’ abilities, skills, and needs, and offer them coaching and mentoring to overcome any weaknesses. At the group level, transformational leadership develops common values and beliefs and inspires unity in order to reach group goals. In this situation, leaders behave equally toward all members of the organization, and the latter have a common perception of the leader’s behavior. Scholars make further distinctions in leadership styles by elaborating on some of the components of Bass’ taxonomy. Chu et al. (2009), for example, elaborate on the concept of charismatic leadership. This is a value-based style that leads to emotional bonds between leaders and followers. The latter transcends their self-interests because of their belief in a collective purpose. Such transcendence results from the followers’ identification and internalization of the vision and values of the leader. A charismatic relationship thus implies trust, respect, admiration, and commitment to the leader. Charismatic leadership is an empowering style with a view to the future of the organization (Conger and Kanungo, 1998; cited in Eagly et al., 2003). According to Murphy and Ensher (2008), charismatic leaders achieve targeted transformation because of the following characteristics: “strategic visioning and communication behavior, sensitivity to the environment, unconventional behavior, personal risk, sensitivity to organizational members’ needs, and deviation from the status quo.” Similarly, Eagly et al. (2003) further distinguish laissez-faire leadership and indicate that this type of leadership is characterized by the avoidance of any involvement in critical situations and the “general failure to take responsibility for managing.”