Definition of the Spotify Model

The Spotify Model is a people-driven, autonomous framework for scaling agile. The model emphasizes the importance of culture and network and is implemented through Squads, Tribes, Chapters, and Guilds. The foundation of the model is the squad and it acts like a Scrum team. 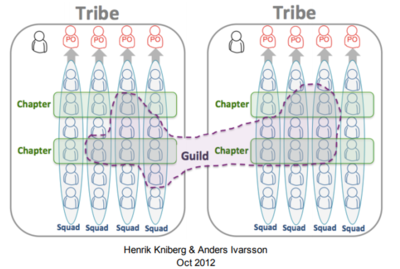 According to Spotify coach Henrik Kniberg, however, The Spotify model isn’t a framework since it represents Spotify's view on scaling from both a technical and cultural perspective. It’s one example of organizing multiple teams in a product development organization and stresses the need for culture and networks.

The model was introduced to the world in 2012, when Henrik Kniberg and Anders Ivarsson published the whitepaper Scaling Agile @ Spotify, which introduced the radically simple way Spotify approached agility. Since then, the Spotify model has generated a lot of buzz and become popular in the agile transformation space. Part of its appeal is that it focuses on organizing around work rather than following a specific set of practices. In traditional scaling frameworks, specific practices (e.g. daily standups) are how the framework is executed, whereas the Spotify model focuses on how businesses can structure an organization to enable agility.

Elements
This is the burning question: how does it all work? This agile model is meant to be both simple and playful while allowing for complex interactions between colleagues. Rather than just another agile framework, the Spotify agile model is an organizational structure based around different groups discussed below.

For more efficiency, their work is as self-contained as possible, in order for progress not to be hindered by tasks external to the squad. Moreover, the tribe is kept in close contact with all relevant stakeholders to facilitate communication. Squads are self-managed. As such, they are free to choose between any agile frameworks (Kanban, sprints, MVP…) as they see fit. Similarly, scrum ceremonies are entirely optional. Giving teams this kind of flexibility requires agile tools. 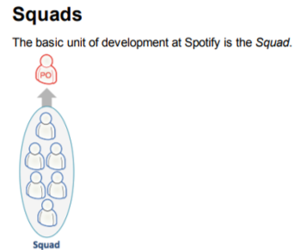 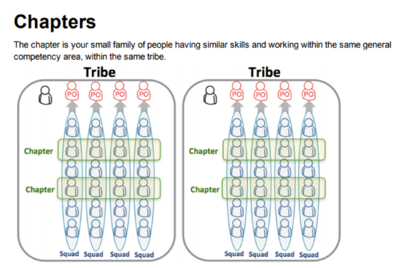 Spotify as a “Scaling Agile Model”[2]

Many of the foundational elements within the model become the backbone to scale agile in the organization adopting it.

The SAFe framework 4.5 is a lean-agile framework for working for several scrum teams together within the same structure. It offers a complete set of tools that range from scrum teams to portfolios. It also offers courses for its implementation and certifications to create coaches of the framework. SAFe offers a complete and detailed framework that reassures its interlocutors. But some experts see it as a framework much too detailed. SAFe tells you how to work, how to coordinate, how to train, and how to put it in place. Whether we like it or not, we must admit that it is incredibly complete. There is a small lean side to want to define everything and optimize. Overall SAFe is a heavy framework.

Spotify had set up a large-scale agile model which later on became very famous in the name of the Spotify model. It was Henrik Kniberg and Anders Ivarsson who communicated it in 2012. However, this model has become a reference and many companies are inspired by it from 2012. The Spotify model doesn’t want to be a big toolbox. The Spotify emphasizes the need to create many interactions to limit the silo side created by the squad. It will be essential to define how each team has to work in a general way or by leaving the autonomy to the teams at 100% usually Spotify model doesn’t detail anything at this level. Moreover, the Spotify model doesn’t bring any solution to manage the portfolio unlike SAFe. Spotify provides complete freedom and the team has to define everything. Overall Spotify is a lightweight framework.

There are no losers or winners, the SAFe framework and the Spotify model both have their advantages and disadvantages. The Spotify model offers some interesting concepts that you can use. However, it will be essential to have an agile coach to help you set up. Whereas SAFe offers training and certification to understand their framework and to create coaches who can guide the team on the framework. One side Spotify provides complete freedom to the team to decide their way of working and on the other side, SAFe will ask you to follow a set of recommendations for its implementation, which is much more reassuring by its strict framework side. The best option would be to use a mix of SAFe and Spotify model and it can produce a very interesting outcome when we blend the Spotify model with SAFe tools.

Applying the Spotify Model to the Organization[5] == If you want to use the Spotify organizational model within your business, you should consider a few things that will be critical to success. By implementing only parts of the method or by trying to impose it on a different corporate culture, you will face difficulties while achieving the same level of success with it that Spotify had.

Remember that the organizational model assumes that engineering is doing development with Agile methodologies. Any Squad choosing to create with the help of the traditional Waterfall process would not be able to keep up with the rapidly changing teams around them. So, the critical requirement in making the model work well is that the whole company works with Agile practices and processes.

If your development teams work in parallel, but legal or marketing does not support an Agile approach, they will become a bottleneck that will slow down the overall company’s speed.

If you’re looking to enable a culture of trust, autonomy, and rapid learning, you can’t go wrong looking to the Spotify model for inspiration. If your organization is looking at the Spotify model as a means to help you approach agile at scale, the following is a list of best practices to keep in mind.

If you focus on these practices you’ll see positive impacts on how your organization collaborates and aligns, whether or not you use the Spotify model as a guide.