Encyclopaedia Britannica defines Industry as a "group of productive enterprises or organizations that produce or supply goods, services, or sources of income."[1]

An industry is a group of companies that are related based on their primary business activities. In modern economies, there are dozens of industry classifications. Industry classification are typically grouped into larger categories called sectors. Individual companies are generally classified into an industry based on their largest sources of revenue. For example, while an automobile manufacturer might have a financing division that contributes 10% to the firm's overall revenues, the company would be classified in the automaker industry by most classification systems. Similar businesses are grouped into industries based on the primary product produced or sold. This effectively creates industry groups, which can then be used to isolate businesses from those who participate in different activities. Investors and economists often study industries to better understand the factors and limitations of corporate profit growth. Companies operating in the same industry can also be compared to each other to evaluate the relative attractiveness of a company within that industry.[2]

Industry is the production of an economic good or service within an economy. Manufacturing industry became a key sector of production and labour in European and North American countries during the Industrial Revolution, upsetting previous mercantile and feudal economies. This occurred through many successive rapid advances in technology, such as the production of steel and coal. Following the Industrial Revolution, perhaps a third of the world's economic output is derived from manufacturing industries. Many developed countries and many developing/semi-developed countries depend significantly on industry. Industries, the countries they reside in, and the economies of those countries are interlinked in a complex web of interdependence.

Industries are organized under different categories. The categories are grouped as to whether they are heavy or light, domestic or foreign, durable or non-durable, or manufacturing or construction industries.

Although generally four levels of industry are discussed, advanced books classify industry into five levels. The terms for each level originate from Latin words referring to the numbers one to five.

How Industry Benefits a Country[6] 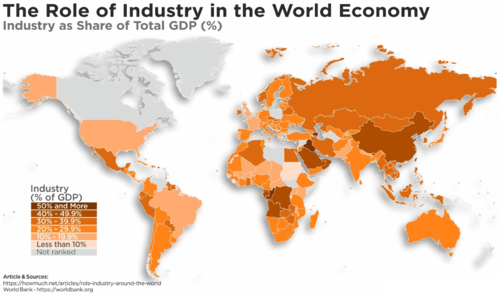