Microservices - also known as the microservice architecture - is an architectural style that structures an application as a collection of services that are:

The microservice architecture enables the rapid, frequent and reliable delivery of large, complex applications. It also enables an organization to evolve its technology stack. 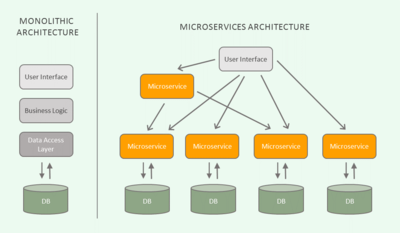 What Microservices are Not[2]

There are numerous claims as to the origin of Micro services. Whilst Vice President of ThoughtWorks in 2004, Fred George began working on Micro Service prototype architectures based on what he called the "Baysean Principals" named after Jeff Bay.

As early as 2005, Peter Rodgers introduced the term "Micro-Web-Services" during a presentation at the Web Services Edge conference. Against conventional thinking and at the height of the SOAP SOA architecture hype curve he argued for "REST-services" and on slide #4 of the conference presentation, he discusses "Software components are Micro-Web-Services". He goes on to say "Micro-Services are composed using Unix-like pipelines (the Web meets Unix = true loose-coupling). Services can call services (+multiple language run-times). Complex service-assemblies are abstracted behind simple URI interfaces. Any service, at any granularity, can be exposed." He described how a well-designed microservices platform "applies the underlying architectural principles of the Web and REST services together with Unix-like scheduling and pipelines to provide radical flexibility and improved simplicity in service-oriented architectures.

Rodgers' work originated in 1999 with the Dexter research project at Hewlett Packard Labs, whose aim was to make code less brittle and to make large-scale, complex software systems robust to change. Ultimately this path of research led to the development of resource-oriented computing (ROC), a generalized computation abstraction in which REST is a special subset.

In 2007, Juval Löwy in his writing and speaking called for building systems in which every class was a service. Löwy realized this required the use of a technology that can support such granular use of services, and he extended Windows Communication Foundation (WCF) to do just that, taking every class and treating it as a service while maintaining the conventional programming model of classes.

A workshop of software architects held near Venice in May 2011 used the term "microservice" to describe what the participants saw as a common architectural style that many of them had been recently exploring. In May 2012, the same group decided on "microservices" as the most appropriate name. James Lewis presented some of those ideas as a case study in March 2012 at 33rd Degree in Kraków in Micro services - Java, the Unix Way, as did Fred George about the same time. Adrian Cockcroft, former director for the Cloud Systems at Netflix, described this approach as "fine grained SOA", pioneered the style at web scale, as did many of the others mentioned in this article - Joe Walnes, Dan North, Evan Bottcher, and Graham Tackley.

Microservices is a specialization of an implementation approach for service-oriented architectures (SOA) used to build flexible, independently deployable software systems. The microservices approach is a first realization of SOA that followed the introduction of DevOps and is becoming more popular for building continuously deployed systems.

In February 2020, the Cloud Microservices Market Research Report predicted that the global microservice architecture market size will increase at a CAGR of 21.37% from 2019 to 2026 and reach $3.1 billion by 2026.

Many use cases are applicable for microservices, especially those that involve an extensive data pipeline. For example, a microservices-based system would be ideal for a reporting system on a company’s retail store sales. Each step in the data preparation process would be handled by a microservice: data collection, [[Data Cleansing}cleansing]], normalization, enrichment, aggregation, reporting, etc. The workflow naturally creates a trackable lineage so if any problems are encountered in the data, it is relatively easy to trace back which microservice might need to be updated.

Examples of Microservices Frameworks for Java[6]

There are several microservices frameworks that you can use for developing for Java. Some of these are:

Others that can be considered include: Dropwizard, Ninja Web Framework, Play Framework, RestExpress, Restlet, Restx, and Spark Framework.

If your organization is thinking about shifting to a microservices architecture, expect to change the way people work, not just the apps. Organizational and cultural changes are identified as challenges in part because each team will have its own deployment cadence and will be responsible for a unique service with its own set of customers. Those may not be typical developer concerns, but they will be essential to a successful microservices architecture.

Beyond culture and process, complexity and efficiency are two major challenges of a microservice-based architecture. John Frizelle, platform architect for Red Hat Mobile, laid out these eight challenge categories in his 2017 talk at Red Hat Summit: