The waterfall model is a classical model used in system development life cycle to create a system with a linear and sequential approach. It is termed as waterfall because the model develops systematically from one phase to another in a downward fashion. This model is divided into different phases and the output of one phase is used as the input of the next phase. Every phase has to be completed before the next phase starts and there is no overlapping of the phases.[1]

The waterfall methodology is composed of seven non-overlapping stages: 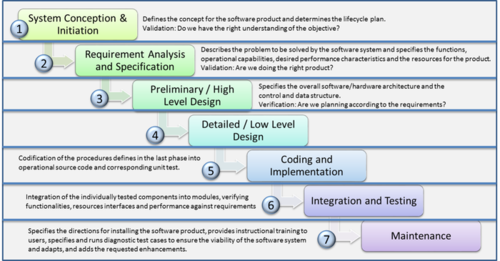 History of the Waterfall Method[3]

Waterfall is a logical pattern to follow - plan, build, test, and release in sequence. The history of Waterfall stems from Winston W. Royce’s 1970 article from the Proceedings of IEEE WESCON, Managing the Development of Large Software Systems. Royce’s article was probably the first discussion of Waterfall in software development, though the word “waterfall” does not appear anywhere in the article. The formal term was introduced in Thomas E. Bell’s and T.A. Thayer’s 1976 paper from the Proceedings of the 2nd International Conference on Software Engineering, Software requirements: Are they really a problem?. As has been noted in many places, however, Royce’s paper did not praise the method. In fact, he described it in unflattering terms, calling it flawed and inviting failure in many ways. He went on to discuss a more iterative approach, perhaps the foundation of what would become an Agile approach.

Bell and Thayer’s paper discusses a change in approach from a bottom-up to a top-down in the development of software requirements, referencing the adoption of this approach in MIL STD 490/483 (MIL STD 490 discusses specifications practices and MIL STD 483 discusses Configuration Management Practices for Systems). The paper is mainly concerned with examining the approaches empirically to determine which works best. Ultimately, the paper declares that “over the last ten years more structure and discipline has been adopted, and practitioners have concluded that a top-down approach is superior to the bottom-up approach of the past.” The term “waterfall” is used in direct reference to Winston Royce’s paper.

Despite the flaws described by Royce, Waterfall became a preferred method in 1985 when the Department of Defence issued DOD-STD-2167A, Defense Systems Software Development. It described the software development cycle as follows:

The forward states that “this standard is intended to be dynamic and responsive to the rapidly evolving software technology field. As such, this standard should be selectively applied and tailored to fit the unique characteristics of each software acquisition program.” However, the requirement was laid out in black and white and followed religiously.

The Waterfall method began to fade from popular use when industry leaders became frustrated with its inflexibility and developed the Agile Manifesto. Since then, more and more companies have adopted Agile, but many businesses still cling to Waterfall, and for good reason. Waterfall has its faults, but it also has its benefits and in the right environment, can be the best practice.

Every software developed is different and requires a suitable SDLC approach to be followed based on the internal and external factors. Some situations where the use of Waterfall model is most appropriate are −

Agile and Waterfall are very different software development methodologies and are good in their respective way.The table below gives a view into the main difference between the two models. However, there are certain major differences highlighted below - 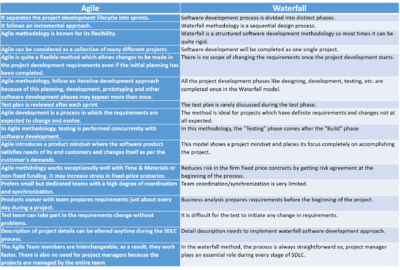 Criticism of the Waterfall Method[6]