The Flexible Firm Model is a management technique for organizing the workplace using various forms of flexibility in order to optimize the use of human resources. Originally proposed by Jon Atkinson of the Institute of Manpower Studies, in 1986, it is based on the principle of segmenting the workforce into core and peripheral groups. The core group is composed of employees that are vital to the organization, functionally flexible, and difficult to replace (perhaps because of their skills, knowledge, or experience). The peripheral group is composed of employees who are numerically flexible because
(1) their skills are in plentiful supply in the labor market, and so they can be easily replaced, or
(2) they are only needed to complete particular tasks (irrespective of the scarcity or otherwise of their skills), or
(3) they are only needed at peak times across the working day or week.
From the employee perspective, it is better to be part of the core than the periphery since the former has greater job security, better remuneration and conditions of work, and better prospects. In addition to the core and periphery employees, the flexible firm model also identifies the importance of external workers—in particular, subcontracted workers who typically undertake activities such as cleaning and catering, which are not core to the business, although important to its running.[1]

Three forms of flexibility are identified by Atkinson:[2] 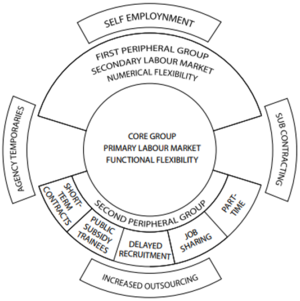 Benefits associated with a flexible staffing strategy include:[3]

The flexible practices are more likely to be adopted by large, technologically advanced employers that operate within concentrated or niche markets Increased international competition has produced various initiatives world-wide for greater organizational flexibility, and emerging new economic trends may be characterized by smaller firms, industrial districts, vertical disintegration, flexible firm strategies and production networks, and flexible technology. The emerging technological pattern of flexible specialization implies that not only certain flexible organizational forms may be observed in different firms or industries, but that flexible specialization is a necessary and crucial factor in championing mass production.

Arguments Against the Atkinson Flexible Firm Model[5]
Although both core and peripheral workers form part of an organisation, they are somehow both distinguished and treated differently. Bryson (1999) has argued that the core employees are more exposed to training and development, and benefit more through their involvement and participation in the various group tasks and activities done in the workplace. The peripheral employees however, seem to have fewer benefits offered in the job, making this an unfair treatment (Bryson 1999). During a country's recession period, the peripheral workers are the ones at higher risk of being retrenched or dismissed from the workplace, because the majority of them have short-term contracts and less opportunities whereas the core employees have a more secure position based on their full-time contracts in the company, states Bryson (1999). So how can organisations use the flexible firm model for better organisational structure? Interesting enough, what is also highly emphasized about the Atkinson's model is that the flexible firm model itself is not exactly the way for structuring all organisations; it is just a model that can help somehow. Organisations can therefore use other means of organisational structure that have been more highly effective in the past. Over the years, managers have had different translations and understanding of the core and peripheral group concept. They have highly criticised the attempts of associating the core with trained, flexible workers, and the periphery with untrained, inflexible workers (Pollert, 1988; Legge 1995). They have stated that such attempts are simply too basic, rather than being more sophisticated. Besides, there is another major complication of dual status. Dual status takes place when an employee finds himself being both a core and peripheral worker, depending on the circumstances at the workplace. Recently, there has been an emerging contradiction in certain organisations that temporary work is often more durable than permanent work, and this contradiction is due to the ambiguity inherent in the contrast between core and peripheral workers. (Pollert, 1988; Legge 1995). The link between the core and periphery sectors is more complicated than it is generally assumed by the core-periphery model (Kallenberg 2001). It is often assumed that employees in the periphery are utilized to protect the core group, but this is not the case. Furthermore, both the core and periphery groups may be linked in most ways than others, especially when it comes to recruitment and selection of temporary agency staff for fixed or full-time positions (Kallenberg 2001). In addition, whether or not the flexible firm model identifies both the core and periphery labour force as a separate employment category is questionable. Some writers have found that the hiring of temporary workers is more likely to happen where demand is predictable. Also, overtime is the ideal method or way to acquire temporary flexibility where demand is unpredictable. Thus, standard workers are not being substituted by temporary workers (Pollert 1988; Legge, 1995; Buultjens and Luckie, 1997). It is highly ironic how recent evidence has suggested that some managers and trade unionists view part-time employees as marginal, because surprisingly, temporary employees and part-time employees are also each treated as separate labour force segments (Pollert, 1988; Legge, 1995; Buultjens and Luckie, 1997). Other studies have illustrated that temporary work is often shown to be a screening procedure used to hire permanent staff instead of a strategy to increase a periphery. On top of that, there is also evidence that the main reason for utilizing self-employed workers is for specialist skills which are unavailable in the core work force. It is not to provide numerical flexibility (Pollert, 1988; Legge, 1995; Buultjens and Luckie, 1997). In summary, experiential research continuously comes to the conclusion that the flexible firm model itself is not enough to explain the changes that have constantly taken place and been observed in organisations (Proctor et al. 1994). Researches who have argued against the Atkinson's model, argued seem to agree that in a majority of cases, the theoretical contrast made between core and peripheral workers basically seems to be unproven (Proctor et al. 1994).