Mobile applications usually help users by connecting them to Internet services more commonly accessed on desktop or notebook computers, or help them by making it easier to use the Internet on their portable devices. A mobile app may be a mobile Web site bookmarking utility, a mobile-based instant messaging client, Gmail for mobile, and many other applications.[2]

Mobile applications are a move away from the integrated software systems generally found on PCs. Instead, each app provides limited and isolated functionality such as a game, calculator or mobile Web browsing. Although applications may have avoided multitasking because of the limited hardware resources of the early mobile devices, their specificity is now part of their desirability because they allow consumers to hand-pick what their devices are able to do. The simplest mobile apps take PC-based applications and port them to a mobile device. As mobile apps become more robust, this technique is somewhat lacking. A more sophisticated approach involves developing specifically for the mobile environment, taking advantage of both its limitations and advantages. For example, apps that use location-based features are inherently built from the ground up with an eye to mobile given that you don't have the same concept of location on a PC.[3]

Others include the following:

Illustrative Example of an Healthcare Mobile App (see figure below) 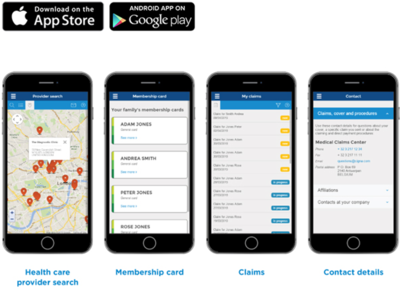 Often, companies build hybrid apps as wrappers for an existing web page; in that way, they hope to get a presence in the app store, without spending significant effort for developing a different app. Hybrid apps are also popular because they allow crossplatform development and thus significantly reduce development costs: that is, the same HTML code components can be reused on different mobile operating systems. Tools such as PhoneGap and Sencha Touch allow people to design and code across platforms, using the power of HTML.

Native, Web App, or Hybrid: Which Should You Choose?[6]
Native apps, Hybrid apps, or Web apps are all ways to cater to the needs of the mobile user. There is no unique best solution: each of these has their strengths and weaknesses. The choice of one versus the other depends on each company’s unique needs.

Although both are used on the same media (smartphones and tablets), mobile applications (apps) and mobile websites (also called Web Apps) are very different. A mobile app is a program that is downloaded and installed onto a user's mobile device, whereas a mobile website is simply a website adapted to tablet and smartphone formats.

Mobile App Security[9]
A large number of companies have adopted [^BYOD-Bring-Your-Own-Device|bring-your-own device (BYOD)] policies; 55 percent now allow employees to use and download business apps on their personal devices, according to Ponemon. To compound issues even further, 67% of companies allow employees to download non-vetted apps to work devices. So how do we secure the mobile work force in the age of BYOD? Begin with these steps to address four key issues:

Mobile malware exploits vulnerabilities or bugs in the coding of the mobile apps. Applying security best practices to mobile app development, including the use of source code scanning tools, can help make mobile apps resilient to such an attack. It is also important to analyze code from third parties, or any app that is allowed to coexist on phones used by employees. In this case, executables rather than source code should be scanned. This concern arises out of a growing trend of hackers to create fake app versions. Hackers can obtain a public copy of a mobile app, reverse engineer it, place malicious code into the app, and redeploy it to the market. Unsuspecting victims then download and use the app, leaving their credentials and personal information exposed to the hackers, including sensitive corporate data such as financials, credit card accounts, patient records, intellectual property, and customer information.

An app’s security is deeply impacted by the underlying device’s security. An unsecured device is one that has been modified by its owner or an unauthorized app to bypass operating system security, in turn allowing the installation of any app and from any source. Such devices, known as jailbroken or rooted devices, are very susceptible to mobile malware. While many organizations prevent such devices from accessing company networks, jailbreak technology is evolving to evade detection. Worse, attackers using mobile malware don’t rely solely on a jailbroken device to facilitate fraudulent activities. Users who grant excessive use of permissions to the mobile applications —often by default — can also provide a pathway for malware to basic services like SMS. To address these issues, it’s incumbent on organizations to adopt technology that will allow device risk to be incorporated into mobile application structure and detect mobile malware. For example, if an app were to execute a sensitive transaction – and the device is rooted or jailbroken -- the app may elect against executing the task. Essentially, by making apps “device risk-aware,” organizations can restrict certain functionalities, remove sensitive data, and prevent access to enterprise resources. Enterprises should look into ways to dynamically gauge the security of the underlying device because the risk introduced by compromised devices is an often overlooked aspect of mobile security.

When mobile apps access company data, documents are often stored on the device itself. If the device is lost, or if data is shared with non-business applications, the potential for data loss is heightened. Businesses should develop a “selective remote wipe” capability to erase sensitive data from stolen, lost, or otherwise compromised mobile devices. Restricting the sharing of company data with non-business apps can help prevent data leakage.

Mobile apps are built to interact with backend services. For example, mobile banking apps allow customers to transfer money to third parties, while mobile CRM apps enable salespeople to update their forecasts and access critical account data. By using context (such as where the access or transaction is coming from, at what time and the action requested) and risk factors (i.e. whether the device is compromised or if the time/location is suspicious), it is possible to prevent or restrict the access to company systems and delay transaction execution.