Self-Efficacy refers to an individual's belief in his or her capacity to execute behaviors necessary to produce specific performance attainments (Bandura, 1977, 1986, 1997). Self-efficacy reflects confidence in the ability to exert control over one's own motivation, behavior, and social environment. These cognitive self-evaluations influence all manner of human experience, including the goals for which people strive, the amount of energy expended toward goal achievement, and likelihood of attaining particular levels of behavioral performance. Unlike traditional psychological constructs, self-efficacy beliefs are hypothesized to vary depending on the domain of functioning and circumstances surrounding the occurrence of behavior. Self-Efficacy Theory (SET) has had considerable influence on research, education, and clinical practice. In the field of health psychology, for example, the construct of self-efficacy has been applied to behaviors as diverse as: 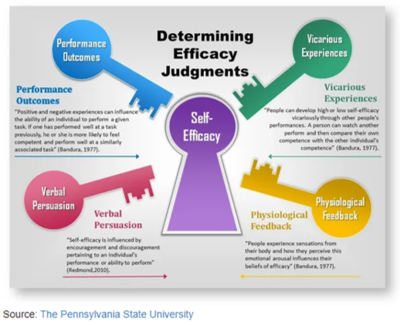 Bandura wasn’t the only psychologist to delve into researching self-efficacy. One example of another influential self-efficacy researcher is James Maddux, who is actually responsible for suggesting the existence of a fifth main source of self-efficacy: imaginal experiences, or visualization (Maddux and Meier, 1995).