A Bureaucracy is specific form of organization defined by complexity, division of labor, permanence, professional management, hierarchical coordination and control, strict chain of command, and legal authority. It is distinguished from informal and collegial organizations. In its ideal form, bureaucracy is impersonal and rational and based on rules rather than ties of kinship, friendship, or patrimonial or charismatic authority. Bureaucratic organizations can be found in both public and private institutions.[1] Bureaucracy in business is a hierarchical organization or a company that operates by a set of pre-determined rules. In a large business, there are typically several diverse functions that need to be performed by specialized sub-institutions that report up the management chain. 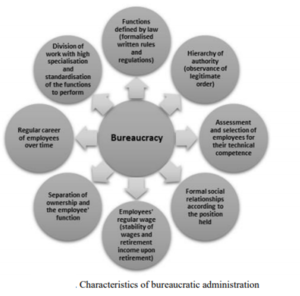 Various commentators have noted the necessity of bureaucracies in modern society. The German sociologist Max Weber (1864-1920) argued that bureaucracy constitutes the most efficient and rational way in which human activity can be organized and that systematic processes and organized hierarchies are necessary to maintain order, to maximize efficiency, and to eliminate favoritism. On the other hand, Weber also saw unfettered bureaucracy as a threat to individual freedom, with the potential of trapping individuals in an impersonal "iron cage" of rule-based, rational control. Modern bureaucracy has been defined as comprising four features:

Bureaucracy in Government and Business[3]

In government or large organizations, bureaucracy is indispensable in administering rules and regulations. A bureaucratic structure is designed to administer large-scale and systematic coordination between many people working at different levels to achieve a common goal. Earlier, it was related to a political organization but in modern times it is associated with the administrative system governing any large institution. The various modes are hierarchy, professionalization, specialization, subdivision, and a fixed way of doing things.

In bureaucratic management, all regular tasks that are to be performed are classified as official duties and imposing rules is the sole authority of the management. Bureaucracy demands bureaucrats to be highly disciplined and abide by the rules. It derives its power from rationality.

Bureaucracy is not just confined to political organizations. Whenever coordination of people is a necessity, bureaucracy is the answer to it. Though bureaucracy smooths the process of realizing institutional goals, at the same time it may make the mechanism appear more important than the desired end service.

The basic characteristics of a bureaucracy are:

Bureaucracy vs. Governance or Administration[5]

An administration directs organizational resources toward an objective goal such as generating profits or administering a service. Bureaucracies ensure procedural correctness irrespective of the circumstances or goals.

In modern industrial societies, such as the U.S., dual bureaucracies often exist between private companies and government regulatory agencies. Whenever a regulatory bureaucracy exists to impose rules on business activity, the private company might create a bureaucracy to avoid violating such regulations.

Pros and Cons of Bureaucracy[6]

In an ideal bureaucracy, the principles and processes are based on rational, clearly-understood rules, and they are applied in a manner that is never influenced by interpersonal relationships or political alliances. However, in practice, bureaucracies often fail to achieve this ideal. Thus, it's important to consider the pros and cons of bureaucracy in the real world.

The hierarchical structure of bureaucracy ensures that the bureaucrats who administer the rules and regulations have clearly-defined tasks. This clear "chain of command" allows management to closely monitor the organization’s performance and deal effectively with problems when they arise.

The impersonal nature of bureaucracy is often criticized, but this "coldness" is by design. Applying rules and policies strictly and consistently reduce the chances that some people will receive more favorable treatment than others. By remaining impersonal, the bureaucracy can help to ensure that all people are treated fairly, without friendships or political affiliations influencing the bureaucrats who are making the decisions.

Bureaucracies tend to demand employees with specialized educational backgrounds and expertise related to the agencies or departments to which they are assigned. Along with ongoing training, this expertise helps to ensure that the bureaucrats are able to carry out their tasks consistently and effectively. In addition, advocates of bureaucracy argue that bureaucrats tend to have higher levels of education and personal responsibility when compared to non‐bureaucrats.

While government bureaucrats do not make the policies and rules they implement, they nevertheless play an integral part in the rule-making process by providing essential data, feedback, and information to the elected lawmakers.

Due to their rigid rules and procedures, bureaucracies are often slow to respond to unexpected situations and slow to adapt to changing social conditions. In addition, when left with no latitude to deviate from the rules, frustrated employees can become defensive and indifferent to the needs of the people who deal with them.

The hierarchical structure of bureaucracies can lead to internal “empire-building.” Department supervisors may add unnecessary subordinates, whether through poor decision-making or in order to build their own power and status. Redundant and non-essential employees quickly reduce the organization’s productivity and efficiency.

Absent of adequate oversight, bureaucrats with decision-making power could solicit and accept bribes in return for their assistance. In particular, high-level bureaucrats can misuse the power of their positions to further their personal interests.

Bureaucracies (especially government bureaucracies) are known to generate a lot of "red tape." This refers to lengthy official processes that involve submitting numerous forms or documents with many specific requirements. Critics argue that these processes slow down the bureaucracy's ability to provide a service to the public while also costing taxpayers money and time.