Ransomware, or Ransom malware, is a type of malware that prevents users from accessing their system or personal files and demands ransom payment in order to regain access. The earliest variants of ransomware were developed in the late 1980s, and payment was to be sent via snail mail. Today, ransomware authors order that payment be sent via cryptocurrency or credit card.[1]

Anatomy of a Ransomware Attack[2]
A common form of delivering ransomware is through malicious attachments to email messages. Users are convinced against their better judgment – through social engineering – to open the attachment. The attachment is typically a form of self-installing malware, often called a Trojan or virus dropper file. Once installed, the dropper enrolls in a cyberattacker’s botnet by contacting the botnet command and control (C2). When contacted, the C2 will generate and return encryption-keying material for the ransomware dropper (and possibly additional malicious code). The ransomware dropper will use the keying material to encrypt personal files on the infected device. It then posts an extortion notification, demanding that the victim pay a ransom payment for a key that will decrypt the now inaccessible data.

Many ransomware attackers threaten victims with permanent loss of their personal files if the ransom is not paid within a 24-hour timeframe. To enhance deception, some ransomware notifications impersonate law enforcement or government agencies and represent the extortion as a fine. 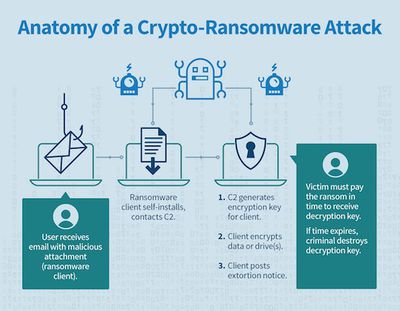 How Ransomware Works[3]
The good news is that ransomware does not usually appear on its own. It must be activated in order to deliver its payload, usually through a malicious link or attachment in an email. There are generally five steps required for ransomware to achieve its objective:

The Spread of Ransomware[5]
Ransomware attacks and their variants are rapidly evolving to counter preventive technologies for several reasons:

Use of known good generic interpreters to create cross-platform ransomware (for example, Ransom32 uses Node.js with a JavaScript payload)

Today’s thieves don’t even have to be tech savvy. Ransomware marketplaces have sprouted up online, offering malware strains for any would-be cybercrook and generating extra profit for the malware authors, who often ask for a cut in the ransom proceeds.

Preventing Ransomware[6]
There are a number of defensive steps you can take to prevent ransomware infection. These steps are a of course good security practices in general, so following them improves your defenses from all sorts of attacks:

Ransomware Protection and Best Practices[7]
Ransomware can be devastating to an individual or an organization. Anyone with important data stored on their computer or network is at risk, including government or law enforcement agencies and healthcare systems or other critical infrastructure entities. Recovery can be a difficult process that may require the services of a reputable data recovery specialist, and some victims pay to recover their files. However, there is no guarantee that individuals will recover their files if they pay the ransom. CISA recommends the following precautions to protect users against the threat of ransomware:

The Future of Ransomware[8]
It will not be surprising if ransomware change in a few years. In terms of potential, they can evolve into malware that disable entire infrastructure (critical not only to a business’s operation but also a city’s or even a nation’s) until the ransom is paid. Cybercriminals may soon look into approaches like hitting industrial control systems (ICS) and other critical infrastructure to paralyze not just networks but ecosystems. A key area that could become a bigger target for cybercriminals are payment systems, as seen with the Bay Area Transit attack in 2016 where the service provider’s payment kiosks were targeted with ransomware.

We have seen ransomware operators hit hospitals and transportation service providers. What would stop attackers from hitting even bigger targets like the industrial robots that are widely used in the manufacturing sector or the infrastructure that connect and run today’s smart cities? Online extortion is bound to make its way from taking computers and servers hostage to any type of insufficiently protected connected device, including smart devices, or critical infrastructure. The return on investment (ROI) and ease with which cybercriminals can create, launch, and profit from this threat will ensure it continues in the future.