What is Network Architecture?[1]

Network Architecture is the complete framework of an organization's computer network. The diagram of the network architecture provides a full picture of the established network with a detailed view of all the resources accessible. It includes hardware components used for communication, cabling and device types, network layout and topologies, physical and wireless connections, implemented areas, and future plans. In addition, the software rules and protocols also constitute the network architecture. This architecture is always designed by a network manager/administrator with the coordination of network engineers and other design engineers. Network architecture matters not just for internal operations but also for consumer interaction with companies. Consumerization and increased use of technology have made it crucial that companies provide platforms that are user-friendly and, for the most part, glitch-free. Consumers do not want slow and cumbersome shopping experiences or processes that require many steps. For example, many companies now offer auto fill-in capabilities so repeat customers have less hassle when checking out. Cloud architecture enables better market agility through traffic partitioning.

When constructing a network, ORACLE recommends studying the different traffic patterns over the network. Cloud computing offers many benefits, but if constructed poorly, a cloud infrastructure can be inefficient. For example, a single network interface used with a multi-node configuration will not be able to accommodate high cloud network traffic. Utilizing different networks/subnetworks to isolate traffic maximizes efficiency and improves functionality. Types of traffic may include guests, storage, or management.

The industry is now using architectures that ease the burden of building and maintaining computer networks for the digital age.

The Open Systems Interconnection model (OSI model) defines and codifies the concept of layered network architecture. Abstraction layers are used to subdivide a communications system further into smaller manageable parts. A layer is a collection of similar functions that provide services to the layer above it and receives services from the layer below it. On each layer, an instance provides services to the instances at the layer above and requests service from the layer below.

A popular example of such usage of the term in distributed applications, as well as permanent virtual circuits, is the organization of nodes in peer-to-peer (P2P) services and networks. P2P networks usually implement overlay networks running over an underlying physical or logical network. These overlay networks may implement certain organizational structures of the nodes according to several distinct models, the network architecture of the system.

The two types of widely used network architectures are peer-to-peer aka P2P and client/server aka tiered.

In a peer-to-peer network, tasks are allocated to every device on the network. Furthermore, there is no real hierarchy in this network, all computers are considered equal and all have the same abilities to use the resources available on this network. Instead of having a central server that would act as the shared drive, each computer that's connected to this network would act as the server for the files stored on it. Advantages of a peer-to-peer network

Disadvantages of a peer-to-peer network

Client-server architecture, the architecture of a computer network in which many clients (remote processors) request and receive service from a centralized server (host computer). In a client/server network, a centralized, really powerful computer(server) acts as a hub in which other computers or workstations(clients) can connect to. This server is the heart of the system, which manages and provides resources to any client that requests them. 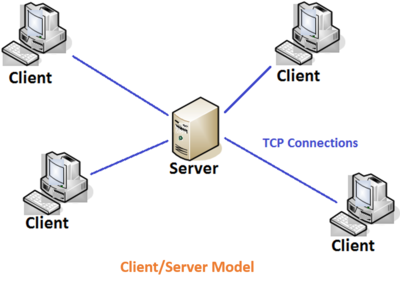 Advantages of a client/server network

Disadvantages of a client/server network